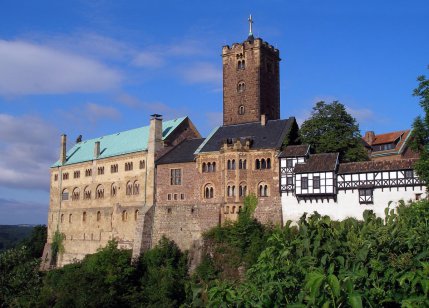 There is hardly a name and place so closely connected than that of Luther and the Wartburg Castle. Martin Luther was brought here in 1521-1522 as “Knight George” following his courageous stand at the Diet of Worms. Hidden from public recognition, he translated the New Testament into German in eleven weeks’ time.

Entrance to the Wartburg Castle

With his translation of the New Testament, Luther contributed significantly to the unification of the German language. For these reasons, the Wartburg Castle is a UNESCO-World Heritage Site. 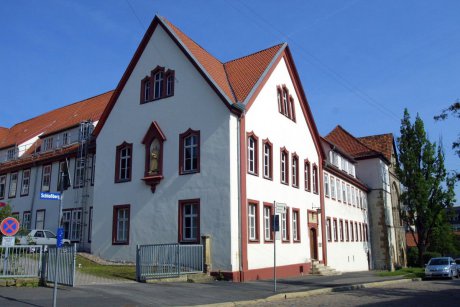 Martin Luther attended school at St. George’s Latin School in Eisenach. He was considered a talented and industrious pupil. Today’s Martin Luther High School is successor school to the Latin school that no longer exists.

It was here in the house of the Cotta family that the pupil Martin Luther received “his room and board.” He earned his keep by helping the son of the Cotta family with his chores. Today, the house serves as a Luther memorial site of the regional Protestant church. The Luther House and museum will be renovated by 2015. 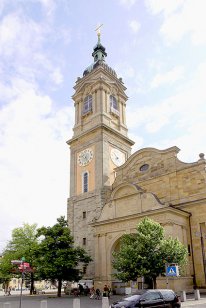 Luther the Reformer preached at St. George’s church many times, including his travels to and from the Diet of Worms in 1521. For three weeks in 1540, he was the houseguest of Superintendent Justus Menius. 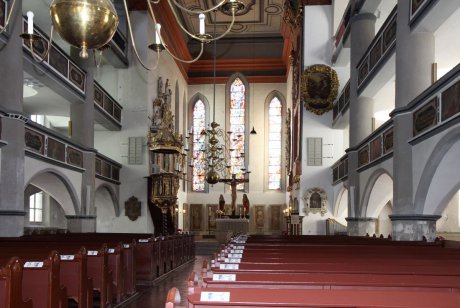 Young Martin Luther sang in the Latin school’s children’s choir. He apparently caught the attention of Ursula Cotta because of his “pleasing singing”, so much so, that she took him in as a boarder. The children’s choir, now a part of the Bach Choir of Eisenach, can still be experienced to this day.

“My dear city” is what Luther called Eisenach, the city where he spent time as a school kid and later where he found protection within the walls of the Wartburg Castle. And, it was in that castle, where he translated the New Testament into German.

From 1498 to 1501, the young Martin attended the Georgenschule (St. George’s School) and was a boarder with the well-to-do family by the name of Cotta. Many of his relatives also lived in and around Eisenach.

After Luther courageously refused to recant his writings at the Diet of Worms in 1521 and was subsequently declared an outlaw and a marked man, the Elector of Saxony, Frederick the Wise, staged a kidnapping and brought Luther to the Wartburg Castle. Luther let his hair and beard grow and wore the knight’s garb, transforming himself into “Knight George”. In the Winter of 1521-22, he translated the New Testament into German from the safety of his confines.

Later on, Luther visited Eisenach several times including his 1529 stop over on the way to the Marburg Colloquy.

… where Martin Luther crammed Latin vocabulary words, sang in the children’s choir, preached in St. George’s church – in spite of house arrest, and later made history in the Wartburg Castle.

Inquire about prices for individuals and groups up to 10 persons.
Special conditions for small groups on demand

Choose a tour!
2 Lutherfinders Climb with You to the Heights … From Latin Student to Knight George

Where else can you imagine Luther’s rise from student to outlaw and bible translator better than from the city of Eisenach to “Luther’s Castle” the Wartburg Castle? Accompanied by words of Luther, we will pass by authentic Luther-sites from his time in school on our way to the place of his supposed imprisonment of one year where he worked as translator of Holy Scripture.

Take Note: The hike rises approx. 600 ft in altitude. in a short distance. Make sure you have appropriate footwear!

Choose a tour!
3 Luther and Bach in Eisenach

Martin Luther and Johann Sebastian Bach: their birthdays may be almost 200 years apart, but their names often uttered in the same breath. As it would happen, their life’s journeys both brought them through the city of Eisenach, where they both spent their childhood and youth. During that time, they attended the Latin School and sang in the St. George’s Choir.

“Luther’s hymns have ruined more souls than his writings and words,” was the cry of the Counter Reformation. Almost all of Luther’s hymns found their way into an influential place among Bach’s compositions. One could say that the teachings of Luther took root in his heart and life.

Stations in the lives of Luther and Bach are brought to life through visiting sites that were important for the one, the other, or for both in their childhood and youth (and beyond).

Stops (with guided tour / accompaniment) as a part of a city tour is possible:

Length of time: 1,5-2 hours. With the Bach House (including an instrumental presentation) approximately 3 hours.

Choose a tour!
4 Luthfinders Show You ... Churches in Eisenach

“Places of Quietude” – we will visit two to three Eisenach churches. In one of them, your Lutherfinder will have devotions with you. If you’d like, you or your group can prepare and hold your own devotions.

Aside from a brief overview of the history and architecture of these Eisenach churches, you will learn something about selected pieces of ecclesiastical art and furnishings and their religious symbolism – in addition, you will learn about contemporary congregational life.
We invite you to join in a moment of quiet reflection, a song, a prayer, and maybe even a few thoughts about something Martin Luther wrote or said.

Choose a tour!
The new Luther House in Eisenach

The ideal combination of a city tour and a museum visit.
New as of 27 September 2015!

We will take you on a guided tour to selected sites in town that are associated with Martin Luther. In the process, your LutherFinder will prepare you for your visit of the restored Luther House. You will become acquainted with the new museum concept. Together with us, you will discover the highlights of the new permanent exhibition „Luther and the Bible“.

Duration: ca. 2 hours
Price: 130.00 €  (English)/ Group (max. 30)
Special price for the Luther House: 5 € per person (for groups of 10 or more, for smaller groups: 6 € per person)
Also: Tour of the Georgenkirche (depending on availability, 1 € per person)
Special conditions for small groups on demand!

The whole world talks about the Great Reformer. Finally, the woman behind the man has a chance to be heard: Katharina von Bora. She was a confident and intelligent woman, a runaway nun, manager of the German family-run firm known as “Luther”, the “Morning Star” of Wittenberg and “Mr. Katie”, mother, preacher, wife, and “dearest”…
Costumed tour with Katharina von Bora (Alexandra Husemeyer) through the historic parts of Eisenach and the Luther House.

The very talkative Lady Johanna of the honorable house Cotta will tell you many a story about the young Luther, who was taken in as a boarder by the pious Mrs. Ursula Cotta during his industrious time as a pupil of the Latin School. She is also able to share a quite a bit about “Knight George” up in the Wartburg Castle as well as other interesting insights about Eisenach during the time of the Great Reformer: from pious school masters and docile pupils, monks and nuns, uprising peasants, the new teachings of Dr. Martin Luther as well as some of the odd customs in Eisenach.