Erfurt // "... is situated in the best location. There just has to be a city there." 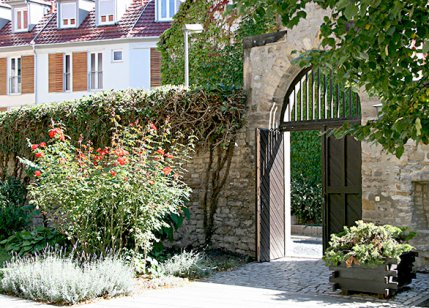 It was through this door on July 17, 1505 that Martin Luther entered the Augustinian Monastery in Erfurt and asked to be taken in a guest, the first step in the process to become a brother of the Order of Augustinian Hermits. He remained a part of the Erfurt Monastery until September of 1511. This time was interrupted by teaching responsibilities in Wittenberg and his
trip to Rome.

Martin Luther lived here as a monk from 1505 – 1511. He celebrated his first mass here in the church on May 2, 1507. According to a number of remarks by Luther himself, these were the most defining years of his life, most importantly his intensive encounters with the Bible and his daily prayers with the psalms. 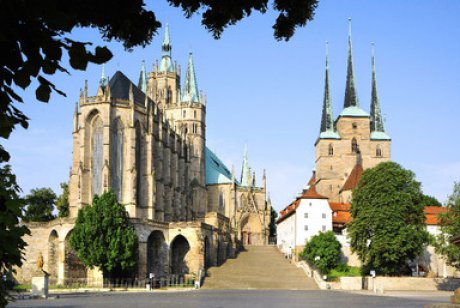 The monumental ensemble made up of St. Mary’s Cathedral and St. Severus on the cathedral mount tower over the city of Erfurt. Martin Luther was ordained a priest in April, 1507 in a side chapel dedicated to St. Kilian. 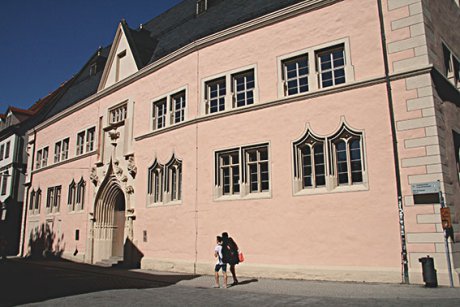 It was here in the “Collegium maius” (the Great College), where the University of Erfurt was founded in 1392. Martin Luther matriculated into university studies in 1501. In 1505 he received his Master’s Degree and began his study of law. And since 2011, it is the home for the Evangelische Kirche in Mitteldeutschland (Protestant Church
in Middle Germany). 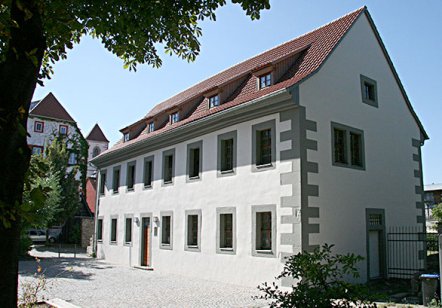 It is believed that Martin Luther lived and studied here in this student house from the end of April of 1501 until he entered the Augustinian Monastery in July of 1505. On the ground floor, one can experience the permanent exhibition, which deals with student life in the middle ages. 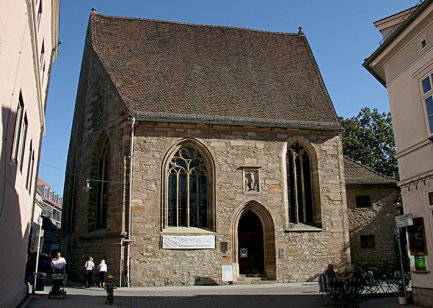 As a student, Martin Luther attended mass regularly at the university church. He preached here years later on October 21, 1522 after the very first Protestant worship was celebrated in this church in 1520. Luther’s friend, Johannes Lang, the Reformer of Erfurt, started preaching in the St. Michael’s church starting in 1530 and was
buried here in 1548.

Martin Luther spent his young adult years in Erfurt from 1501-1511. His father had planned for him to study law and he arrived at Erfurt University at the age of 17. One trip back and forth from, however, changed his life forever.

On July 2, 1505 during one of his trips on foot in the nearby Stotternheim, the young student was caught in a severe thunderstorm. Afraid for his life, Luther took a vow to Saint Anne to become a monk if she spared him his life. Two weeks later, he entered the Augustinian Monastery to begin his process of eventually becoming a brother of the Augustinian Hermits. As Brother Martin, he lived a strict monastic life, was ordained a priest in 1507 in a side chapel of the Erfurt Cathedral and began his theological studies.

Martin Luther remained, with a few month-long interruptions, in the Augustinian Monastery until the fall of 1511. He returned often to Erfurt and preached to excited crowds in churches like the Michaeliskirche (St. Michael’s), the university church.

Erfurt became Luther’s spiritual home. The shift from student to monk marked the beginning of one of the most momentous transformations in the history of the church. Important roots of Lutheran theology and the Reformation find their grounding in Erfurt. In later years, Luther quoted someone from Erfurt who said to him, “there has to be a change, and it has to be a huge one; things can’t stay the way they are.” Luther confidently added to this memory in one of his table talks with the sentence, “I think it might have happened!”

Inside the Augustinian Monastery in Erfurt

What is today a church, a museum, and a conference and retreat center, was once Martin Luther's home for nearly 5 years. The chapter house, the exhibition including the 'Luther cell', and the church historic stained glass windows will give you an impression of his life as a monk 500 years ago.

Choose a tour!
Luther’s Alma Mater – A Tour in the “Collegium Maius" (the Old University of Erfurt)

Luther once described the University of Erfurt as “my mother, to whom I give thanks for everything.” With Luther as an example, you will be introduced to the life of a student in the 16th century. In addition, you will see the interesting juxtaposition of historic and modern architecture. Collegium Maius is now home to the administrative offices of the Protestant Church in Middle Germany (Evangelische Kirche in Mitteldeutschland).

Choose a tour!
More than a Seventh Martin Luther – in His Footsteps through the City

Martin Luther set foot in the University of Erfurt more than 500 years ago. It was a moving experience. Follow in his footsteps and visit with me the sites of his student and monastic life. The exhibition in the Augustinian Monastery and the Georgenburse (student house) are the highlights of this tour.