Mühlhausen // “The Arch-Heretic’s Nest”, as the Princes found out

The five nave Gothic church is Thuringia’s second largest hall church after the cathedral in Erfurt. Thomas Müntzer, the leader of the German Peasants’ War preached here. The church building was secularized in 1975 and is home to the Müntzer-Memorial and belongs to the museums of Mühlhausen.

The church of St. Crucis, known as the "Kornmarktkirche" (Grain Market Church), simple and defined in size and proportions, was a part of the Franciscan monastery until 1542. The hall-like interior space houses an exhibit, which presents the history, major events, and aftereffects of the German Peasants’ War. 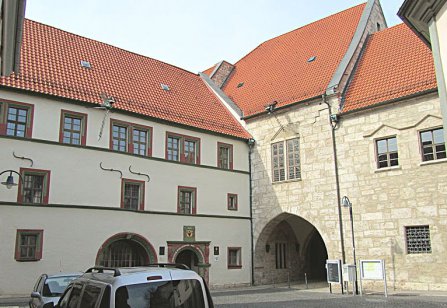 The city hall stood at the center of the conflict here during the time of the early Reformation and the Peasants’ War from 1523-1525. In March of 1525, Thomas Müntzer inaugurated the 16 members of the “Eternal Council” into office.

In 1524-25, Thomas Müntzer lived and worked in Mühlhausen and made it to be the center of the more radical powers of the Reformation. The pastor, whom Luther originally encouraged, developed over the years into an “enthusiast”, who wanted to push through the Reformation and its societal changes through violent means. This was something that Luther rejected and urged against the use of violence. He wasn’t able to stop the historical development, however, that led to the Peasants’ War. In 1525, Thomas Müntzer was captured during the Battle of Bad Frankenhausen, tortured at the Wasserburg Heldrungen, and executed before the gates of the city of Mühlhausen on May 27th.

Martin Luther himself never set foot in Mühlhausen. In spite of this fact of history, the city is still closely connected to the Reformation.